Slovakia international Marek Hamsik has stressed that Napoli are not focusing on Juventus ahead of the new Serie A campaign. The Naples outfit managed to secure 91 points during their previous season under Maurizio Sarri but they were still unable to stop Juventus from winning the title with a six-point advantage. 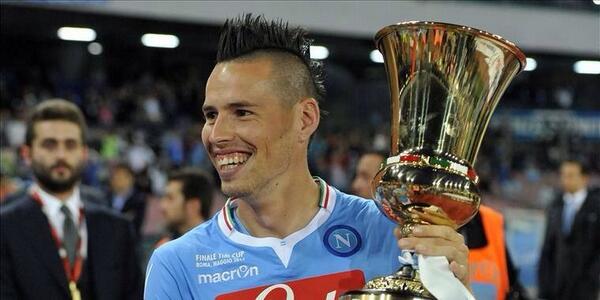 In an interview with Premium Sport, Hamsik indicated that the club are not looking into the progress made by the Bianconeri and their sole focus lies on the season opener versus Lazio, he said:“We’re not thinking about them. The first game [Lazio] will already be difficult, the most important game is always the closest one.”

Meanwhile, Hamsik admitted that new boss Carlo Ancelotti was influential towards him staying with Napoli after the club did not receive a suitable offer for him to head to the Chinese Super League, he added: “The right offer [From China] didn’t arrive so I stayed. It doesn’t change anything, I’ve always given my best for this shirt and I’ll continue to do so. I have a new [deeper] role, we’ll see what happens. Ancelotti? He was one of the factors that pushed me to stay because he kept calling me, he told me to stay.”

“The Naples outfit looked very likely to end their trophy drought during the previous campaign“ but things fell apart during the backend of the season where they felt the pressure of leading the standings. As such, they could only settle for a runner-up finish behind“ the Bianconeri and their “challenge this term is expected to become much tougher with the champions strengthening the squad further.

Cristiano Ronaldo has been the Bianconeri’s and the summer’s standout signing after making the shock move from Real Madrid and the Portuguese would unquestionably be eyeing the league title to create history. No professional footballer has yet to win the top-flight titles in England, Spain and Italy to date.